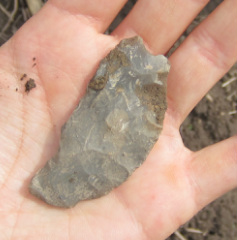 Before Europeans came to the Americas, Indian nations extended from the southernmost tip of south America to the northernmost reaches of North America. These societies were as diverse and advanced as European societies and ranged from nomadic hunting and gathering groups to large cities. Archaeological evidence from these cultures is spread across the Americas, including the Upper Midwest.

Minnesota is home to many archaeological sites including small camp sites to large village and sacred sites.  Because modern people  want to live in the same places today that  people lived in the past, archaeological sites are frequently encountered during development projects.

Inadvertently uncovering an archaeological site during development can not only result in costly project delays, but also significant legal concerns.  By including archaeologists and cultural resource specialists in the planning stages of a development project can minimize the potential for encountering archaeological or sacred sites.

10,000 Lakes Archaeology understands these pressures and is experienced in conducting research, archaeological surveys and excavations. We encourage tribal involvement in our projects and are experienced in both formal and informal tribal consultation. By working together, archaeologists, developers, and American Indians can find respectful and cost-effective solutions to potentially costly and sensitive problems.